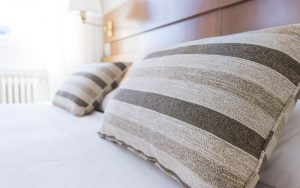 In this edition of Ai LIVE, host E. Vincent Martinez speaks with Michel Smith Boyd, founder and Creative Director of Smithwood Interiors. Boyd’s unique style has appeared in the pages of Architectural Digest, Elle Decor, Atlanta Homes, and Lifestyles, and he makes regular appearances on channels like Bravo and HGTV. He discusses how he developed both his career and style through his experiences, as well as navigating the balance of a brand.

Boyd didn’t wait until graduation to get started in his career as an interior designer. He saw that he and his fellow classmates would be competing for future jobs. In his junior year at The Art Institute of Atlanta, he developed a plan to take small jobs and network so that he could build relationships, which he attributes as “…the most important thing in business early on.”

For Boyd, this personal sense of style seems to come naturally. But this confidence came over time. “I wasn’t this confident at all when I first graduated.” One of his biggest fears was that he would end up mimicking the aesthetics of people he admired, such as renowned designer Kelly Wearstler. However, his own experiences and definitions of luxury build on the foundations that inspired him. “I just don’t think it’s a bad thing to experiment and to try different things and evolve into who you are.”

When it comes to collaborations with other designers, Boyd is often the one reaching out for these partnerships. Speaking on his experiences in collaborating with others, he says, “I wanted to be seen as someone who could add value. I wanted to be seen as someone who respected that community, and was open to collaborating.” Boyd focuses on the intention behind collaborations, knowing that his work will be seen by others and these hold the opportunity for expanding his portfolio. “It’s not a perfect formula, but I believe that persistence and consistency are key.”

While it may seem that being a brand owner is a dream come true, Boyd acknowledges that it’s a heavy crown to wear. “Every day I’m figuring it out.” For him, the hardest part of building a brand is your own individual point of view. There’s also the trial of managing time and various projects, a side-effect of success. Yet this success allows him to bring on people who cover his weaknesses and allows him to get back into design work

“That’s the balance. We balance rooms for a living, but balancing that life, or trying to evolve into something bigger and better is also a task.”